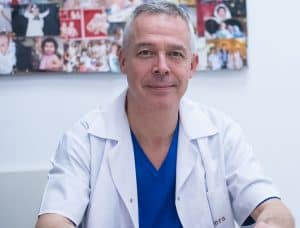 Dr. Daniel Damian
Seen through the male prism, infertility becomes a more delicate and difficult to accept problem, largely due to prejudice but the immediate but wrong association with impotence. However, it is important to know that many infertile men can have perfectly normal, satisfying sex.

The standard investigation for the evaluation of the male partner is the spermogram, which ensures an analysis of the semen, the concentration and motility of the sperm, as well as their morphological aspects. Depending on the results, additional tests may be recommended, such as sperm culture, sperm biochemistry, urethral secretion culture, urine analysis to investigate retrograde ejaculation or genetic testing.

What are the causes of male infertility?
From the point of view of causes, the problem of male infertility remains as complex as the female one: the determining factors are varied and multiple, starting from hormonal imbalances to physical or psychological problems. Lifestyle can also play an important role in causing infertility, so men who adopt a balanced and healthy lifestyle are more likely to produce more viable sperm.

An important cause of male infertility, but not the only one, is varicocele, represented by dilated vessels on the scrotum, which can lead to a reduction in the number and quality of sperm.

Other causes can be:

Sexually transmitted infections such as Chlamydia, Mycoplasma, gonorrhea, inflammation of the prostate or testicles
History of mumps with testicular damage (urlian orchitis)
Blockages in the sperm-carrying ducts – acquired through inflammation during life or existing at birth (eg in people with cystic fibrosis)
Hormonal imbalances
Certain medications – testosterone therapy, long-term steroid use
Chromosomal genetic defects
Testicular tumors – which can be detected during the investigation of infertility
Environmental factors such as industrial chemicals, heavy metals, radiation, and drug use, smoking, alcohol, stress, body mass influence fertility
“In most cases, male infertility shows no obvious signs or symptoms, except for the inability to conceive a child. However, there are some situations in which the existence of this condition is felt, presenting symptoms such as sexual dysfunction, pain or swelling in the testicular area, reduced facial and body hair and a production of sperm below normal, “says Dr. Daniel Damian, primary care urologist specializing in andrology, infertility, reproductive surgery and endourology at the Gynera Fertility Center.

If the man complains of one or more of these symptoms, a medical consultation, usually performed by a urologist, is recommended. After a physical examination, he recommends performing a spermogram to check the quantity and quality of sperm.

Sperm abnormalities are defined according to the affected parameters. These are called: oligozoospermia, asthenozoospermia, teratozoospermia and azoospermia.

Teratozoospermia means the presence of too high a percentage of sperm with altered morphology or structure.

Azoospermia consists in the absence of sperm from the semen at ejaculation.

This pathology can be classified, in turn, in: obstructive and non-obstructive.

Obstructive azoospermia is caused by an obstruction of the elimination canal, and non-obstructive is the result of deficiencies in sperm production.

Surgery – to repair dilated vessels in the scrotum (varicocele)
Medications – they can improve retrograde ejaculation or hormonal dysfunction
Assisted reproduction – use of complex laboratory methods:
Intrauterine artificial insemination
In vitro fertilization, often aided by an additional technique, ICSI (Intracytoplasmic Sperm Injection)
The choice of procedure is determined by the severity of infertility and may involve, in severe cases, the collection of sperm by a surgical procedure (from the channels that carry sperm or even directly from the testicles).

How to increase your chance to conceive

FutureLife and the IVF program with donated oocytes

Medicine of the Future in the new Gynera Floreasca Park Center

How to increase your chance to conceive